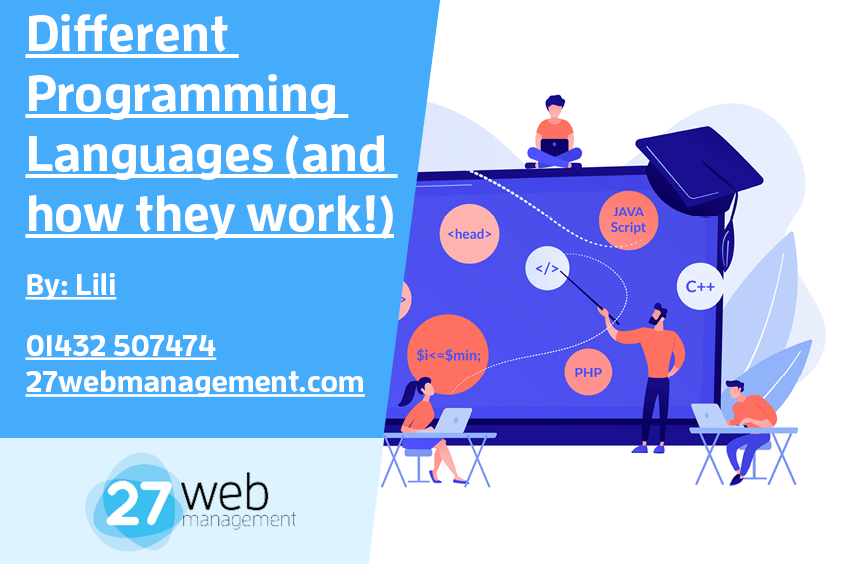 What is a programming language?

A programming language is “…a computer language programmers use to develop software programs, scripts, or other sets of instructions for computers to execute.” Each programme has its own syntax, which refers to words and spelling of key terms the programmer inputs into the specific programming language to carry out the different programme functions. A programmer will write the source code which will be compiled into machine language that can be understood by a computer. If the programme is in a script language, then an interpreter will be used to execute the script.1

Machine Language is also known as First Generation Programming Language and is the fastest Low-Level Programming Language. As a computer is a group of millions of switches which can either be switched ON or OFF at a very high rate, the computer understands ON and OFF as 0s and 1s, and so Machine Language is only in 0s and 1s. This type of code doesn’t need to be converted and is directly readable by the computer.

Object-Orientated Programming Language uses Classes and Objects for creating a programme. Every problem is viewed as an object. “Some of the basic concepts of Object-Oriented Programming are Object, Class, Inheritance, Abstraction, Polymorphism, and Encapsulation.”

Scripting Languages are Run-Time Programming Languages, used for performing automation/repetitive tasks by using scripts. Web automation or Web Scripting is one of its applications.

Is the Internet of Things worth investing in?
25th November 2021

How is Computer Science Helping to Protect the Environment?
5th November 2021

What are progressive web apps and why are they so popular?
22nd October 2021

This website uses cookies to improve your experience while you navigate through the website. Out of these cookies, the cookies that are categorized as necessary are stored on your browser as they are essential for the working of basic functionalities of the website. We also use third-party cookies that help us analyze and understand how you use this website. These cookies will be stored in your browser only with your consent. You also have the option to opt-out of these cookies. But opting out of some of these cookies may have an effect on your browsing experience.
Necessary Always Enabled
Necessary cookies are absolutely essential for the website to function properly. This category only includes cookies that ensures basic functionalities and security features of the website. These cookies do not store any personal information.
Non-necessary
Any cookies that may not be particularly necessary for the website to function and is used specifically to collect user personal data via analytics, ads, other embedded contents are termed as non-necessary cookies. It is mandatory to procure user consent prior to running these cookies on your website.
SAVE & ACCEPT